On February 20, TC Winston reached its peak intensity with ten-minute sustained winds of 230 km/h (145 mph) and a pressure of 915 hPa (mbar; 27.03 inHg), shortly before making landfall on Viti Levu, Fiji.
Leaving behind so much destruction in the northern islands plus fatalities - the last number I saw was 44 dead. So very sad. The Fiji government is currently estimating the damage at $226 million (US).

So, if you would like to donate, we know that Sea Mercy is an excellent choice.

The day after Winston blew thru, plans were already being made to get fast relief to the outer islands.

Several of our friends loaded up their boats with supplies and headed north.

Wish we could have helped...

Moondance and crew were safely tucked up in the Port Denarau mangrove creek. Along with 30+ boats.

It was excellent example of everyone working together to make sure all were safe.

Port Denarau Marina continued to send out updated weather information. Plus, the Yachties pitched in to make sure all boats were secured.

We had 5 lines tied to the mangroves on the port side; 4 on the starboard side; plus anchors bow and stern.  And, at low tide, we were stuck in the mud. Moondance wasn't going anywhere!

Very Special Thanks to Don on s/v Coromandel.  He had us all organized and tied to the mangroves. Plus, continued to row up and down the creek checking on everyone.

At Winston's peak, we saw 45+ knots of wind out of the south that lasted about 5 hours. After that, the wind switched around to the north and our wind dropped to 20 knots.

That's when we went to bed and slept well - we were pooped!

Some boats saw 100 knots of wind.  It really depending on where you were in the creek.  But, all were safe.

The following day, Geoff on s/v Flashback volunteered to take his long boat to the Marina.

We had so many lines to maneuver thru and around. It wasn't easy, but worth it.

The Rhum-ba was open and serving beer and pizza (yeah!) and we were ready to get off the boat, plus wanted to see how Port Denarau weathered the storm.

It was surreal to see the marina completely empty, but good to find out that they had only received minimal damage.

Well, except for the power.  Parts of Fiji are still with out it...

So, we hope that we never have to go thru another cyclone, but it is very good to know that the mangrove creeks provide an excellent safe haven.

Plus, to know how well the Port Denarau Marina and the Yachties worked together to ensure all were safe!

PS: We did have one small issue... Entering the creek at high tide was necessary, but causes quite a current.

Moondance ending up going side ways and got stuck on a mud bank (yes, laying on her side).

It took lots of help to get her moving again the next day at high tide. Until then, we were able to stay on one of the other boats that weren't occupied.

Just staring at ol' Moondance...  Happy to report that no damage occurred.  Well, maybe our pride!

Lesson learned: if possible, go up the creek at slack tide! 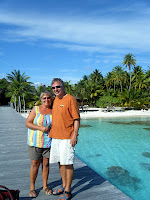 Welcome aboard Moondance!
We are Carla and Doug and we been living aboard since 2000.
16 years on our 42' Tayana sailboat (8 years in Alameda, California; 8 years cruising the Pacific). Loved it!
Now, we are living aboard in San Diego on our 38' Ocean Alexander Trawler getting her prepped to motor to Mexico.
Come follow our adventures! 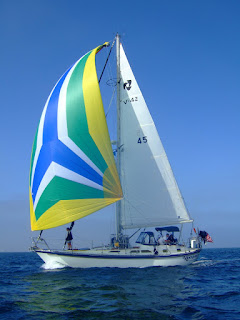